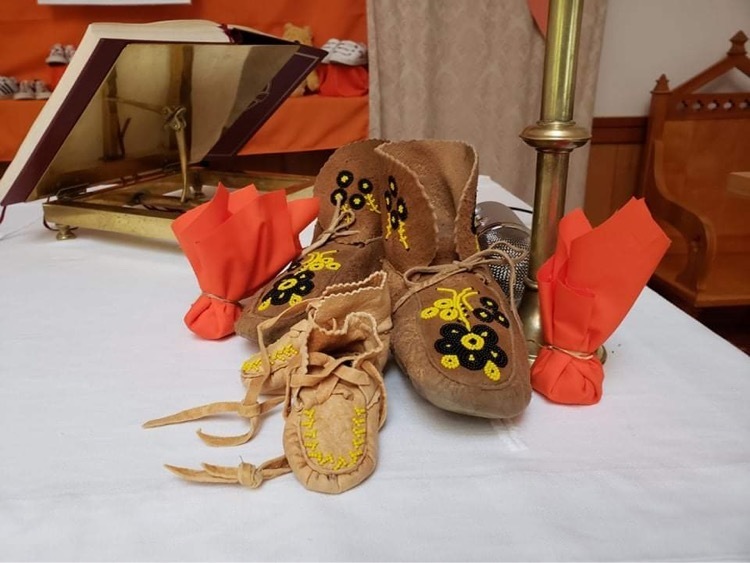 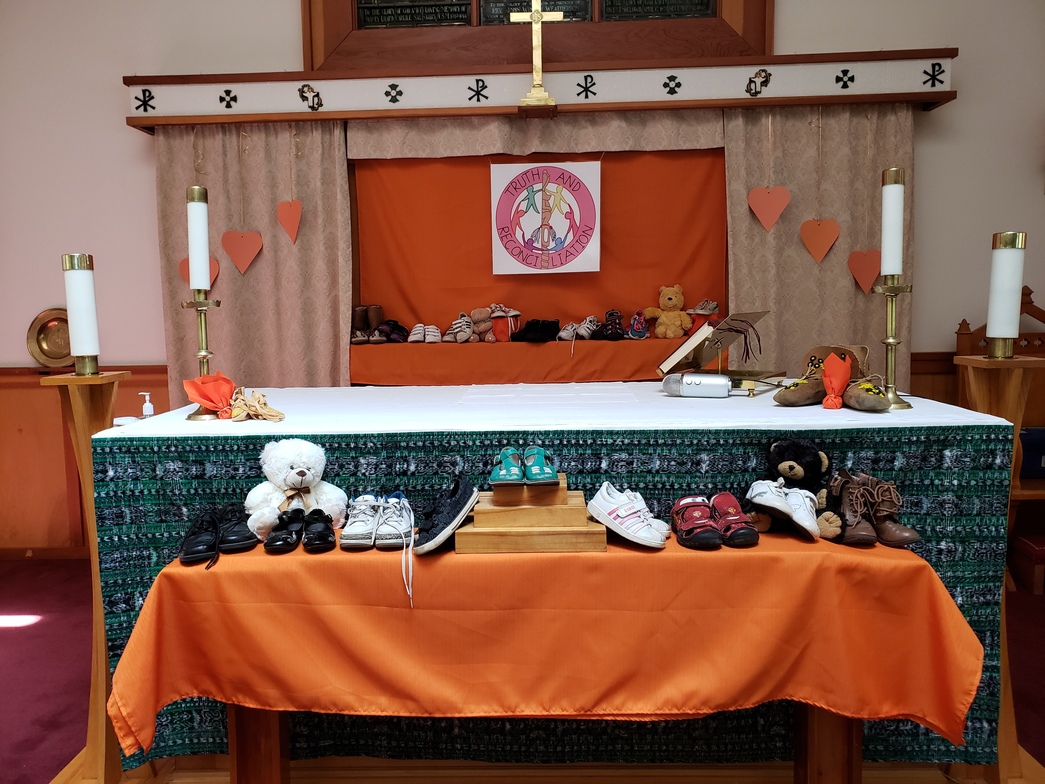 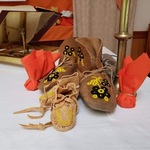 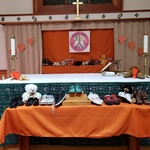 All Saints, Mission devoted the whole month of June to Truth and Reconciliation. Children's shoes and toys were arranged around the altar, so it could be seen on zoom. These include moccasins that belonged to Indigenous members of our congregation.
On June 3rd a group of parishioners of All Saints observed the Burning ceremony and  a Vigil for remembrance and healing for Indigenous peoples and the community at large after the locating of unmarked graves in  Kamloops. This was sponsored by the Mission Friendship Centre at Fraser River Heritage Park which was the site of the Residential School.
A church member gave witness during Sunday worship.
"The ceremony began with a fire for the burning of traditional food, to which Elders, one at a time, followed by other people attending, could add food.  The food burned was a spiritual way to symbolically feed the starving children forced to attend Residential Schools.  Drumming and singing accompanied this ceremony. Two of the congregation were drummers.
Following this, several Elders who had attended Residential School spoke about what they had endured and how it affected them.   One Elder who had attended a school in the coastal area of BC spoke about hate being the only thing she learned there.  Carrying all this anger resulted in a self-destructive life in Vancouver.   Fortunately, she was able to turn her life around and realize that, as she said, love, not hate, was the answer to living life.   As a result, she strongly encouraged her children to pursue education.  One son became a doctor.  Another Elder requested that if people want to help with reconciliation, that housing is a huge area of need.
A very generous lunch was served, and as is the custom in Indigenous culture at least two of us parishioners, as Elders, were given lunch.
The Vigil was very moving and left us saddened but with more emotional understanding of what transpired in these schools. We need to not only to acknowledge the missing Children who lost their lives in neglectful and abusive ways, but also the many ways its legacy continues to harm our Indigenous neighbours.  It is a first step toward healing, and I hope another step towards Reconciliation."
Worship on Sunday June 20 included text compiled by the Anglican Council of Indigenous Peoples.  Drummers were present during the service and the church bell was rung at the conclusion of the service.
We had a special collection for the two scholarships we have given for five years now to First Nations, Metis or Inuit students graduating from Ecole Mission Secondary School. Our students this year are Rena Knight and Vera Peters. Rena is Lil’wat and has worked with the elders in her community to learn their teachings. She feels privileged to have learned so much and has willingly shared her knowledge with others. She is part of the school drum group and has worked with and supported a younger elementary school girl. As a child who has been in care due to substance abuse issues in her family, she has proven to be resilient, answering the call to help others. She hopes to be a minister or a counsellor and to that end has been accepted at both Columbia Bible College and the University of the Fraser Valley.
Vera is Chawathil. She has been impacted by the residential school system on both sides of her family; sadly her mother is one of the Missing and Murdered Indigenous Women. This led Vera to be one of the creators of the MMIW gathering in Mission which is now organized by Mission Friendship Centre. She is a drummer and a gifted singer and has mentored students at Hatzic Middle School. She wants to be a chef and expects to enter Riverside College, then transfer to UFV. At present she is working full time as a cook in Hope and completing her Grade 12 through Summit Learning Centre. As Jody Shaw, MSS Indigenous Department Head says of our two winners, “They are both strong young women walking in a good way.” We offer our congratulations to Rena and Vera and wish them all the best in their future studies.
Thanks to a generous donation last year, we are pleased to be able this year to give each recipient $750 instead of the usual $500.
The All Saints, Mission Truth and Reconciliation Committee

October/November Services and Events Welcome Back to our Fall Services Gospel and Homily September 5, 2021